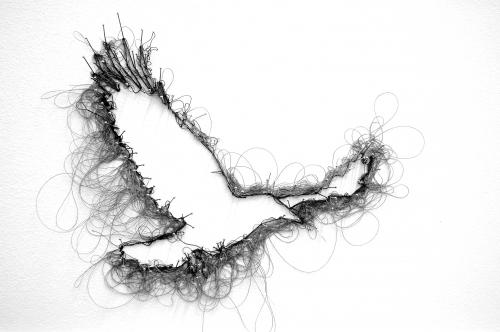 "I feel as if I am taking thread out of its comfort zone, presenting it on monumental scale and creating an eye-catching, and in some case, jaw dropping effect."

Debbie Smyth is a textile artist most identifiable by her statement thread drawings. These playful yet sophisticated contemporary artworks are created by stretching a network of threads between accurately plotted pins. Her work beautifully blurs the boundaries between fine art drawings and textile art, flat and 3D work, illustration, and embroidery by literally lifting the drawn line off the page in a series of “pin and thread” drawings. “On first glance, it can look like a mass of threads but as you get closer sharp lines come into focus, creating a spectacular image. The images are first plotted out before being filled out with the thread; the sharp angles contrast with the floating ends of the thread. Despite the complexity of the lengthy process, I try to capture a great feeling of energy and spontaneity, and, in some cases, humour.” Debbie plays with scale well; creating both gallery installations and works for domestic interiors. Her unique style lends itself to suit corporate environments, public spaces, window display, set design, graphic design and illustration. By collaborating with interior designers, architects and other creative practitioners, Debbie pushes the expected scope of her work even further. Debbie has worked with companies both nationally and internationally including Adidas, Mercedes Benz, Hermes, Ellesse, The New York Times, The Canadian Red Cross, Sony, and The Dorchester Hotel Group