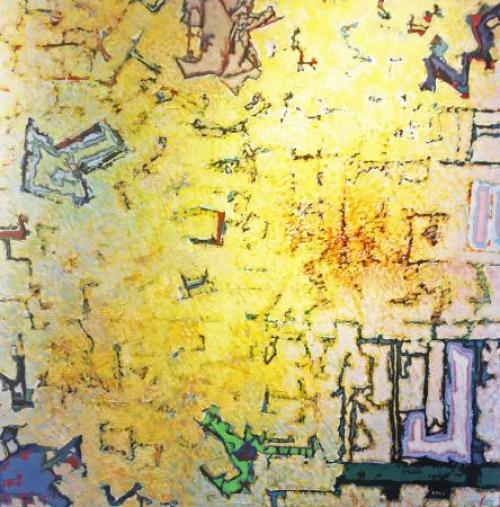 John studied at Rochdale, Newport and Cardiff colleges of art where he earned the David Murray Landscape painting scholarship from the Royal Academy of Arts, London. His tutor was the late Richard Eurich R.A, who had a major influence on John’s approach and attitude towards the depiction of landscape. His artistic influences include the work of Kurt Schwitters, Antonio Tapies, Per Kirkeby and Gerhard Richter. Like them, John relishes the broad use of a variety of materials and processes. His images evolve through a dialogue between the internal idea or source of inspiration and the medium/media used to produce it. The work, therefore, becomes an autonomous entity with its own logical coherence with sometimes only a glancing relation to what exists outside its frame. John has exhibited widely, both in this country and abroad, participating in two Biennales in Monaco and one in Cleveland, UK. He recently showed in a fundraising exhibition at the Saatchi gallery in London. His work is in many public and private collections, including those of Bristol education authority, Kent authority and Hampshire County Council. He mainly uses the media of oil paint, acrylic, watercolour and various printmaking techniques (including etching and lithography). He is available for private commissions, tutorials and private tuition. He currently lives and works in Winchester, Hampshire.