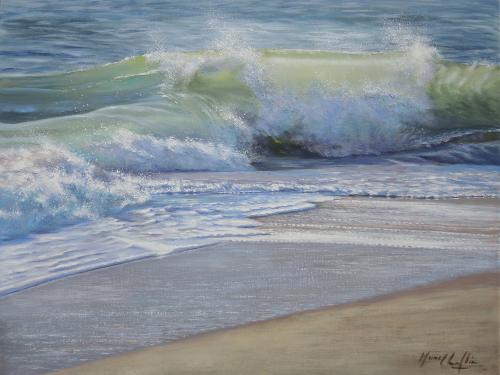 French artist Mary Chaplin lives and works in Wailly, a picturesque hamlet surrounded by ponds, rivers and woods, in the North of France. For more than twenty years she has worked as a self-taught professional artist, always inspired by nature and by the varying effects of light. She started her career by painting figurative scenes she saw around her in the French countryside. Her first artworks were representations of landscapes, gardens, forests, rivers or lakes, which allowed her to explore different techniques, including pastel, oil, acrylic and watercolour. However, both her life and career reached a turning point in 2005 when she witnessed the ‘holy light’ in a chapel she was visiting; she was deeply touched and inspired by the beauty of the reflections coming from the stained-glass windows, and thus she started painting them, calling them her ‘reflections’, or, in French, ‘méditations’. After that experience in the chapel, her will to convey the ephemeral nature of the light she captures, and its soothing warmth, became stronger. This new artistic birth enabled her to follow new paths in which she explores light’s numerous and ever-changing facets. This deeply influenced her artistic style and work as it gave them a new dimension, shifting from a figurative representation of light in landscapes and still life to an abstract and more personal and metaphorical interpretation and appropriation of light’s fugacity. Since her beginnings, Mary Chaplin’s work has been published in several articles in the press and in specialized art magazines. It also has been broadcasted on television and is regularly exhibited in festivals dedicated to sacred art as well as in art galleries throughout different countries, including France, Belgium and England.