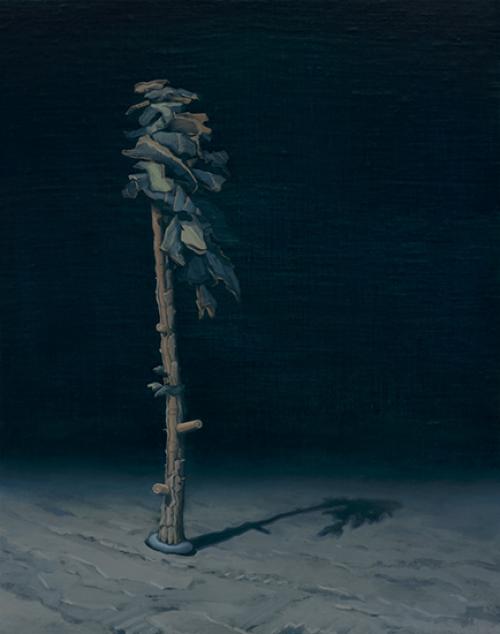 Tom Down is the 2018 winner of the Jackson’s Open Painting Prize and was in the shortlisted exhibitions for the 2019 Lynn Painter-Stainers Prize and the 2018 John Moores Painting Prize. His work is a continuing exploration of the idealised romantic landscape. Responding to the works of historic painters, Tom recreates their works as a series of lo-fi maquettes built in the studio. These crude facsimiles are made quickly from polystyrene, cardboard, glue and paint. With every last torn edge, rough surface and crooked joint on display, these models revel in their own fakeness. They act as a playful simulacrum of the original landscape paintings – which themselves are semi-fictions: idealised, meticulously constructed visions of real-world landscapes.  He then sets about creating images from these maquettes, using dramatic lighting, photography and digital imaging software, and finally rendering them in oil paint. At first glance, the paintings are recognisable as a traditional landscape, but further scrutiny undermines this reading. A bank of snow comes into focus as sheets of polystyrene; a hazy sky resembles a loosely hung sheet; blobs of plasticine reveal themselves beneath branches – quiet acts that interrogate ideas of the spectacular and the sublime.  By juxtaposing the monumentality of the subject matter with the humbleness of the materials that depict it, Tom aims to take a look that way such images are portrayed and mediated in our culture. We are collectively familiar with mountainscapes, forests and the like – but in the contemporary world, these images are mediated through the artifice of film, television, video games, advertising and social media. Down’s multi-layered approach to image-making reflects these various forms of simulation, and in doing so, act as a commentary on the artifice of painting itself.

Artwork by Tom Down